Do You Take Initiative? 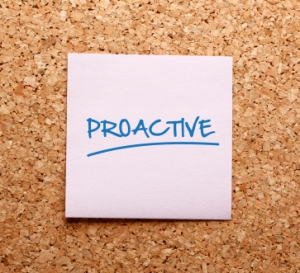 Duh.  I Know To Take The Initiative.

You’ve heard that you should take initiative. Duh. But do you do it? Do you suggest ideas? Do you seek to improve the situation? Do you take action? Do you do it when it isn’t expected? The FREE Dictionary defines “take the initiative” as “to activate oneself to do something even if one has not been asked to do it.” That last part is the important part–even if one hasn’t been asked to do it.  Do you do things without being asked to do them? Do you surprise the people you work with by taking on things and getting them done?  So many of us wait around to be told to do stuff.  Do you see things that need to be done, problems that need to be solved, and do you take them on and get them done?

Taking the initiative can make the difference between getting noticed and not.  It can get you attention from the right people in your organization.  Part of the reason for that is that it is such a surprise when people actually step out of their ‘wait to be told’ role and think for themselves and take action.  You may think I’m crazy.  You may think that people take the initiative all the time.  But think about the last time someone actually surprised you by doing something that needed to get done that wasn’t clearly in his/her responsibility.

People who are good at their job are good at what their job is–not beyond that.  People who take initiative are beyond good at their job.  They are on their way to being good at the next level job and the one beyond that.  They are thinking (and acting) like their boss.  Whoa, you may say.  My boss won’t like that.  I’ll step on his/her toes.  There is a difference between ‘doing’ your boss’ job and taking iniative.  When you take initiative, you help your boss rather than step on his/her toes.  You lift some of the load.  Remember–SURPRISE is the key.

So How Do You Take Initiative?

We are well trained to do what we are told.  We learned it at home.  It was enforced at school.  (I once did a survey of middle school teachers of how they identified students who were leaders.  Many of them said the leaders were the ones who followed directions, were quiet and did what they were told!)  We learned to succeed at our entry level jobs by learning and following the rules quickly and well.  Our bosses expect us to do the things that are in our job.  They don’t expect much else.  And so we learn.  We modulate our brains and actions to fit without our roles.  We wait to be told to act beyond the day to day-ness of our jobs.

The first time I did it, I did it by accident.  I created a report of my observations about something just because I was  too full of my own opinions to keep quiet about it.  It didn’t occur to me that anything would happen except that someone might read my report.  Then I just couldn’t stop with the opinions and made some suggestions at the end of the report.  I didn’t see it as taking the initiative.  I saw it as finding a way of expressing my opinions and ideas that were trying to push their way out of me.  Apparently this spontaneous creation of opinion and suggestion (on a problem that had been driving people nuts for a while) from someone at my level was completely unexpected.  It got attention.  It got me called into a meeting with people at the top of the organization to be questioned about my ideas.  It got me assigned to the group to implement some of the ideas (that got funded beyond my imagination).  It started my career on its way.  I recently found a copy of the report I wrote so long ago.  It wasn’t particularly well written.  Today I would know how to ‘sell’ the ideas and I would have pre-sold them to people to make the organization more receptive.  My reaction when I found that report, however, was–that is when my career hit a pivot point.  When someone read that report, he was surprised.  Maybe the surprise itself made him pay attention to the content.  I can see now:  I took the initiative.  That accident taught me the benefit of taking the initiative.

So What Do You Do?